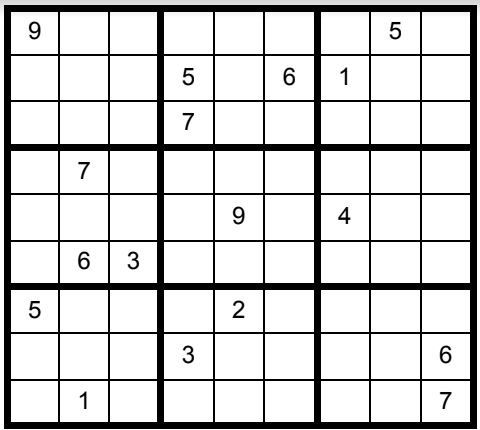 Experience the power of the 6 with puzzle #45!

Once you have completed the puzzle, to the extent that you have  filled-in all obvious answers and have written all potential options  across the top of the unsolved cells (PUZZLE PREPARATION), Dan  recommends the following Steps to complete the puzzle.

Steps 1-5 are relatively common techniques and are explained in  the TI LIFE articles above. Steps 6-8 are covered in detail, in Dan’s  book.

As a reminder, the basic rules of Sudoku are that the numbers 1-9  must be contained and cannot be repeated in a row, column, or box, and  there can only be one solution to the puzzle.

Start with the 1’s to see if there are any obvious 1-choice answers. Then navigate the 2’s through 9’s.

NOT-SO-OBVIOUS ANSWERS … There are none.

MARK UNSOLVED CELLS WITH OPTIONS THAT CANNOT EXIST IN THOSE CELLS …

FILL IN THE OPTIONS FOR THE UNSOLVED CELLS …

Once you fill in the options for the unsolved cells, your grid should look like Example #45.3 below:

We will begin with Step 1, identifying Pairs, Triplets, Quads & Quints. We will search each row, column and box. Can you spot any Step 1 clues in Example #45.3 above?

Row 1 has a hidden pair & a quint. Take your choice. Personally, I  spotted the quint before the hidden pair. In any event, C3R1 & C7R1  are the only two cells in row 1 that contain the options 6 & 7.  Therefore, all other options for those two cells can be eliminated. Now  your grid should look like Example #45.4 below:

There are no other Step 1-5 clues. We will now move to Step 6: Dan’s Yes-No Challenge.

There are 3 circumstances that establish the potential for a Step 6 exercise:

We will start by searching the 1’s to see if there is a potential Step 6 clue, and then navigate through the 2-9’s.

In column 1 we find just 2 unsolved cells that contain the option 6 … C1R3 & C1R9. These cells are not in the same box, thereby qualifying as a candidate for a Step 6 exercise. The options in these cells are highlighted in yellow in Example #45.6 below:

Do you agree that one of these two yellow cells in column 1 must be a 6? We will consider them as “driver cells” which “drive” the exercise.

Now notice in box 6 a 6 exists as an option only in C8R4 & C8R5.  Therefore, we have created an Interaction and the 6 in C8R3 can be  eliminated. Now your grid should look like Example #45.9 below:

We still need more clues to solve the puzzle, so we will perform another Step 6 exercise.

Your final grid should now look like Example #45.12 below:

May the gentle winds of Sudoku be at your back.

Do you tackle a Sudoku on your cottage veranda, sailboat cockpit, or at a campsite?  Write and tell us where?  OK.

In January 2016, we published a final article in his series – but  many of us enjoy using “Dan’s Steps,” so when he asked if we would like a  puzzle to solve every month … this editor said an enthusiastic… Yes,  please! Now we are three years later and on Puzzle #45!

I suggest you purchase Dan’s book, “3 Advanced Sudoku Techniques, That Will Change Your Game Forever!”

Dan’s book is available online, amazon.com and on ebay.com.

Purchase of a book includes a 50-page blank grid pad, 33 black and two green tokens, to assist with Step 6.…

Most importantly, I ask that you leave comments on any part  of his series and throughout the year.  Remember when your teacher said  – no such thing as a silly question – as we can all learn together.

As always, I want to thank Dan…and his proofreader… Peggy! As we  head into the Fall Season – I am hoping you will enjoy our Sudoku and at  the same time join me in thanking Dan  - I have a hard time doing the  puzzles – let alone creating them! Bravo.

Although most of these beautiful old wooden tour boats no longer ply the waters of the Thousand Islands, they will always have a special place in the region’s history.