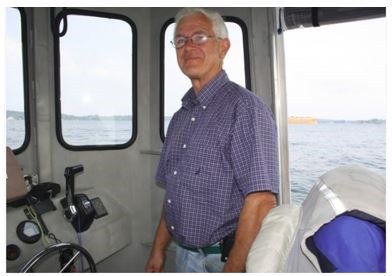 Actually, this year got off to a flying start with the unfortunate grounding of the Pacific Huron near Twin Island. This occurred just as the 2017 season was closing.  The St. Lawrence Seaway was extending the closing date to accommodate  the last ships trying to clear the River at the end of the year. The  ship apparently had a steering problem and grounded near Twin Island and  was then overtaken by unusually cold weather. Local contractors  assisted, but the re-floating was delayed awaiting the arrival of  powerful tractor tugs. The weather continued to hamper the situation and  led to the freezing of the ship in a lock at Massena.

The first boating incident of the season was a dispatch for "boat  taking on water near the foot of Round Island; two people with life  jackets in the water and trying to swim to shore." The water is very  cold at that point and makes this a real urgent event. Two boats  operated by Clayton Fire Department members responded quickly from Round  Island. The two men were assisted from the water and transported to the  care of TIERS and fire units on the shore. The boat was salvaged by  contractors. I am told that a plank had come loose in the bottom. Only  the tip of the bow, with the club burgee flying bravely, could be seen  when we arrived. It was a close call for all concerned.

Back on the Island, a serious heart condition was noted by the  responders, and arrangements were made for a quick evacuation to  Syracuse by helicopter. Clayton fire boat, Last Chance, and TIERS, and  Life-Net helicopter made it all happen quickly, and the victim survived.

Another call was to a small island north of Grindstone Island for a  serious shoulder injury. Clayton Fire Department and TIERS combined to  provide extrication and transport to the hospital for treatment.

An early season trip for a large cruiser was interrupted by an  apparent collision with a "deadhead" that put a large hole in the bow of  the boat. They managed to get to the Municipal Marina near the Harbor  Hotel. Once there, responders were able to put pumps aboard and plug the hole enough to partially de-water the boat and then salvage services  towed it to be hauled out on the travel lift at St. Lawrence  Restoration.

The next day there was a call for a disabled boat near buoy #1, off  Frink Pier. One person was reported in the water. A near-by boater was  able to get a line aboard and take the vessel in tow. The man in the  water was the captain and he climbed back aboard once they were under  way to the Marina. They were escorted by CFD vessels until secure at the  marina.

After a fairly quiet summer, Labor Day weekend was an explosion of  activity. The fire department received 22 dispatches in 9 days. That is  extraordinary for a volunteer department. The major event was initiated  when a VHF radio call to the USCG was monitored. The caller was  on a sailboat anchored in Canada, and he was reporting a burning  building on Grindstone Island, across from Camelot and Endymion Islands  (part of the 1000 Islands National Park). The structure was  fully-involved and a total loss. Clayton FD was assisted at the scene by  fireboats from Gananoque, Wellesley Island, and Alexandria Bay. Two  commercial salvage boats also assisted at the scene. There were no  injuries.

A few days later there was a cottage/garage fire at St. Lawrence Park. The fireboat assisted at a re-kindle.
A very early morning alarm sent us to the French Creek  Bridge east of Clayton, where a truck had left the road and was in the  River, apparently with people still inside. A quick response by Clayton  FD and TIERS assisted the driver and his rescuer from the water.  Recovering the pick-up truck from under the bridge took until nearly  daylight. Commercial salvage groups cooperated to retrieve the truck.
Finally, we were dispatched to rescue a lost hunter  in the French Creek swamp. He had been lost since the prior day, and  forty-degree temperatures had been experienced during the night. His  cell phone battery was week, and ammunition was limited. An attempt to  reach him by ATV was unsuccessful.  A prolonged effort to get to him by  FD's aluminum rowboat was complicated by the shallow water. We were  contemplating trying to get to him with the airboat, but were informed  by police that a State Police helicopter was enroute from Massena to  assist. After a long and difficult struggle with frogging poles and  shallow water, we were very near him when the helicopter arrived, landed  in the marsh, and then flew him to safety. We spent part of the rest of  the afternoon trying to find a place where the FD could get close  enough to the creek to recover the boat,....and us. It was a long, hard  day, but the result was a successful rescue, so we were all happy.

Clearly,  this is not a complete compilation of all the FD activities of the  season, but it is intended to represent some of the more interesting  events and to enhance the community's awareness of the importance of the  fireboat and the associated equipment and personnel to our summer  community and visitors.

Dr. Richard  (Dick) L. Withington is a retired Orthopedic Surgeon and is best known  on the River for his rescue work, with his boat “Stormy.”   Each winter  Dr. W. writes articles that provide his special view of the Thousand  Islands – and we thank him for this.

His first article for TI Life, A Winter Islander, was published in January 2009.  To see all of his island experiences, search TI Life under Richard L. Withington. Also be sure to see The Doctor is in, February 2012, written by Kim Lunman, writer and publisher of Island Life, a print magazine.

However, you don’t have to wait a year for more excitement…  you can  almost sit beside him as he jumps into his boat, “Stormy,” and heads out  to one of dozens of accidents – and learn first-hand how important our  life saving partners, the Clayton and Gananoque Fire Departments, the  Coast Guard and the Thousand Islands Emergency Rescue Service (TIERS)  are to our Thousand Islands. How can you do that? Dick Withington is the author of a simple spiral-bound book:  “First Responder” published in  2016.

Comment by: Raymond Pfeiffer
Left at: 7:52 PM Friday, January 11, 2019
It was great that you could rescue me, Dr. Withington.  You have also  rescued my mother, my father and my brother at various times over the  years.  Many thanks!

Comment by: Jan Arno
Left at: 5:30 PM Tuesday, January 15, 2019
So enjoy the articles by Dr.Withington .Having been a nurse in his  office for 22 years I know what a fine Doctor and man that Dr,is .Thank  God the River has had him to help with rescues.

Uncle Aaron was a true outdoorsman; he knew how and where to catch squirrels, how to find wild honey trees, where to gather hickory nuts, how to trap a muskrat, and where the fish were biting – a true man of all seasons.